On cloud nine in the Tà Xùa mountains

Tà Xùa, a high mountain range locating in the natural border between northern provinces of Sơn La and Yên Bái, has been known as “Paradise in the Clouds”, which hosts forests of ancient Shan Tuyết tea trees, some several hundred years old.

The range consists of three peaks – according to the map by the People’s Army, the highest peak is 2,879m, the second is 2800, the lowest named Dinosaur Backbone is 2,582m.

Photographers and backpackers who’ve been to Tà Xùa always talk about hunting moving clouds on the dangerous routes.

The mountains covered with clouds create a mysterious beauty, which is more alluring when viewed from Sống Khủng Long (Dinosaur’s Backbone), which located in Bắc Yên District of Sơn La Province.

The Dinosaur’s Backbone, seems to lie in the middle of the sky.

The path to its peak is dangerous. In some places, there is only one small path with deep abysses on both sides.

When stepping on that path, strong winds can shake travellers’ bodies, forcing them to double over or be blown off.

A sign erected on the top of the peak says: “Tà Xùa Paradise of Clouds” – an official acknowledgement of the nickname.

People talk a lot about the beauty of the clouds. If lucky, tourists will see a sea of clouds nestled below them in the centre of the huge mountain range. They often come in all shapes and colours. It’s a fairy land.

Yet getting to this heaven is not simple. We reached Tà Xùa on a rainy day. The zig-zag roads were steep, muddy and covered with humid grey clouds.

Phạm Vũ Khánh, a low-land man, who has settled down in the locality for dozens of years, received us.

He said many people climbed up to Tà Xùa, but few were lucky enough to see the legendary “cloud land” appear.

He wished us good luck. That night, Khánh invited us to have Tuyết Shan tea, Hang Chú rice wine and some dishes made from a local species of black pig.

We enjoyed the local delicacies, which kept us warm, but worried a lot because it was raining cats and dogs.

Most of us went to sleep wondering if we would be able to see the magic clouds in the morning.

Before dawn next day, we were awakened. Khánh urged us to get in a car to the Dinosaur Backbone peak without delay.

Because he has lived there for a long time, he senses when and where beautiful clouds will appear. It seems to depend on the seasons and time of day.

It was still raining, but much less than before. Khánh was correct. White clouds were flying up from the valleys. We had to reach Dinosaur Backbone as soon as possible to catch the beautiful images. 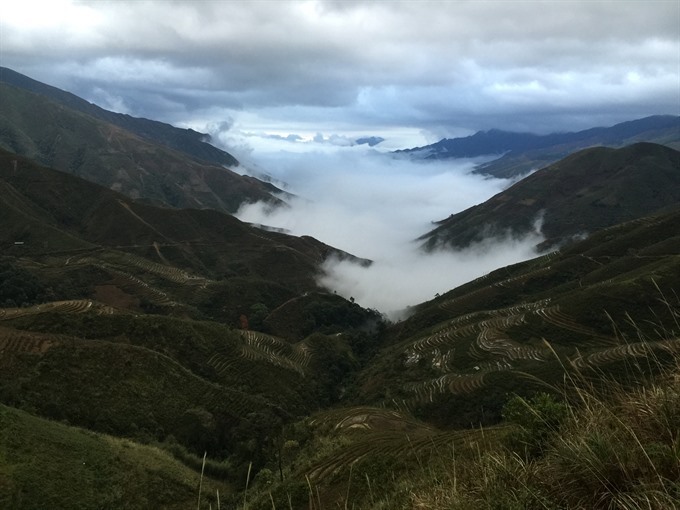 Lake of clouds: Standing on top of Dinosaur Backbone Peak, one can see terraced fields and a valley filled with clouds. VNS Photo Trần Mai Hưởng

Three kilometres from the peak, our car could go no further as there was a landslide. We all continued by catching motorbike taxis servicing the remote area. My driver was fairly agile. He was only 16.

He took visitors on his bike to the landslide to make extra money for his vocational training. Without him, we would have had to walk and missed our chance of seeing the wonderful clouds.

The last trek was only 2km, but extremely hard. From a distance, the path curving along the side of the mountain looked fairly romantic, but we slipped and fell when we took our first steps.

We had to overcome high slippery slopes in the rain. We pushed forward, pressing down with our toes on the path as there was nothing to hold on. We were lucky to reach Dinosaur Backbone peak together with many other young people hunting for clouds.

Then the sun started to shine. From the furthest edge of Dinosaur Backbone, we could see clouds hanging here and there.

The feeling of travelling on top of clouds, above the clouds, flying between land and sky was so special.

We took great photos of clouds of unforgettable scenes before it rained again.

Everything was then submerged in a huge grey blanket of fog. We returned to the small path with abysses on both sides.

The wind blew strong as if it would lift us off. What an experience!

Tà Xùa is located in the middle of Bắc Yên, a mountain district with advantages in economy and culture, and home to seven ethnic groups.

Hồng Ngài Commune, just next to Tà Xùa, was the homeland of the A Phủ couple, the main characters in the novel.

At the event, local authorities announced a decision by the National Office of Intellectual Property to recognise Tà Xùa Tea trademark as a local delicacy.

Forests of Shan Tuyết tea trees, hundreds of years old, are a special feature of the area.

Big tea trees with broad branches grow on high mountains covered with clouds all year round. They seem to absorb the essence of sunlight and wind into their leaves.

The tea leaves, after being dried, should be infused with boiling water taken from a fresh stream.

The tea is a yellow colour, like honey, and tastes bitter and salty, but with plenty of flavour on the tip of the tongue. People cannot forget the tea even after one sip. 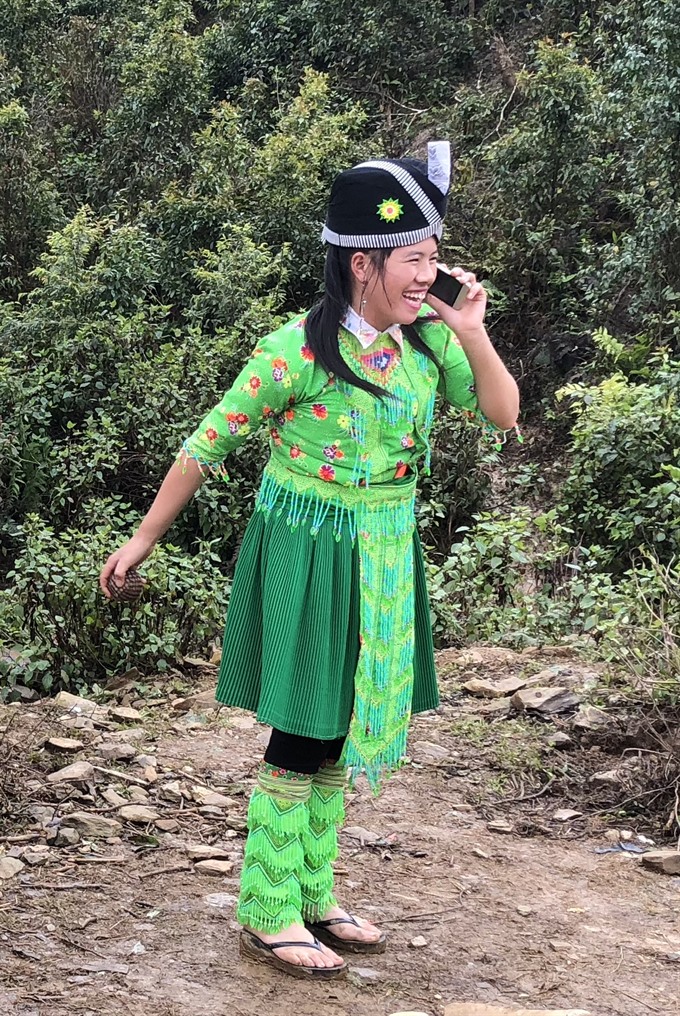 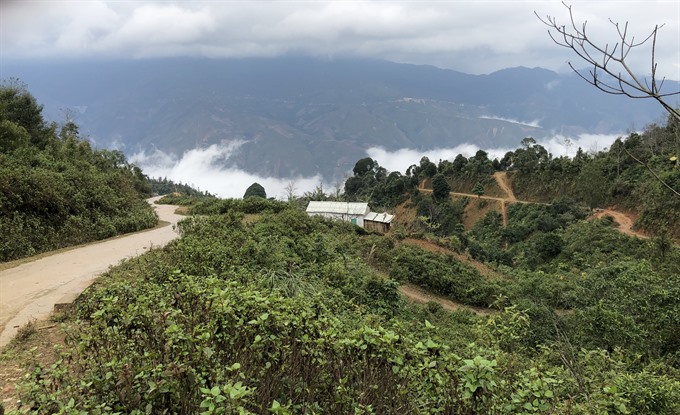 The path: A view over the local valley. VNS Photo Trần Mai Hưởng 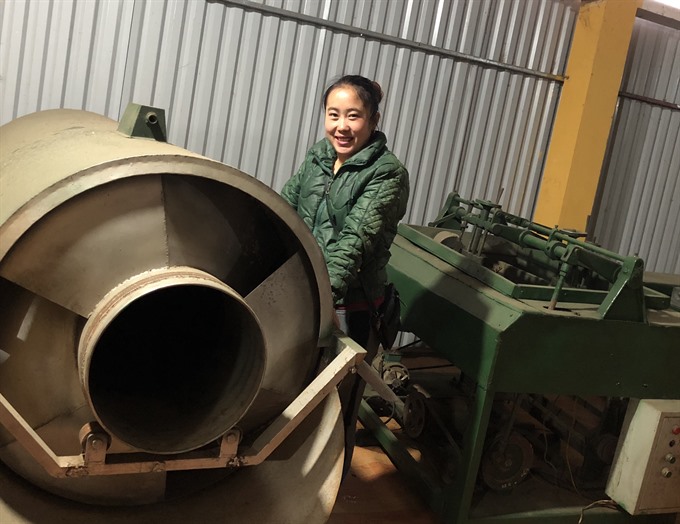 To the Mông ethnic people in Tà Xùa, Shan Tuyết tea is like a valuable herb that helps them erase tiredness after hard working days.

There are 450 households, mostly the Mông, in Tà Xùa. They live mainly by planting tea trees.

The local authorities have co-ordinated with the Tea and Northwestern Region’s Delicacies Company to preserve 90ha of ancient tea trees while giving seedlings and training techniques to locals to plant a new area of 100ha of tea.

We paid visit to the local tea processing plant. It can process 15 tonnes of fresh tea leaves a day.

We met young officials at the plant, including Mùa A Vừ, Mùa A Tòng and Mùa A Ca, who have good knowledge and plenty of enthusiasm, because tea provides a stable income for local residents.

Khánh took us to the ancient forest in Bẹ Village, where 200-year-old tea trees grow on mountain sides. The village stretches along a valley like a painting. At the forest, we met young Mông women in beautiful clothes, playing folk games on the road.

Remembering When We Could Travel Freely…